As Cave Creek’s original “Wild West Saloon and Restaurant,” Harold’s is a landmark and popular stomping ground for both locals and tourists. Celebrating over 80 years of history and good times.

If it happens in Cave Creek, it happens at Harold’s. Johnny Walker opened the Corral Bar in 1935 to serve the workers who were building Bartlett Dam. It became Harold’s Cave Creek Corral in 1950 when local character Harold Gavagan purchased it. It has spawned a million crazy stories – from lions and tigers caged in the back to Harold himself along with his flamboyant friends, movie stars, (real) cowboys and other colorful characters. Gavagan’s flamboyant ways helped to turn it into the local landmark that it is today. 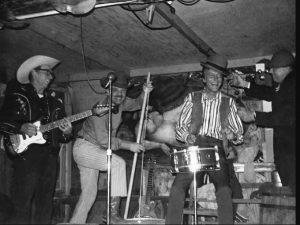 Many celebrities have frequented Harold’s. Some to wine and dine on the fine food and some because it was their film location… Warner Bros. filmed Rafferty and the Gold Dust Twins starring Mckensie Phillips, Alan Arkin and Sally Kellerman; other films were Electroglide in Blue starring Robert Blake and Jeannie Riley and Little Foss and Big Halsey with Robert Redford. Dick Van Dyke and Hugh Downs frequent Harold’s, but then, the locals always know the best spots.

Harold’s features seating for 600 inside, 200 on outside patio, 2 bars, a large stage and dance floor, free Country Dance Lesson on Friday’s from 7:30pm to 8:30pm and Live Entertainment by some of the BEST bands in the valley Wednesday through Sunday.

Harold’s Corral is the official home of Heinz Field West at Pittsburgh Steelers Club. It is the place for all faithful of the Black & Gold to meet on Sunday, watch their beloved Steelers and down a couple of Iron City beers.

There is always something happening at Harold’s. Whether you come here for one of our annual events such as Fiesta Days, 3rd of July Fireworks, Bachelor & Bachelorette Auction, Gong Show, Hawaiian Luau, Wild West Days, Harold’s Anniversary Party or one of our many charity events. Harold’s Corral is the place where the festivities begin and end.

Long time Cave Creek Mayor Vincent Francia says “We all end up at Harold’s at some point. Sedona may have it vortexes, but Cave Creek has Harold’s and it’s the center of the universe.”